“All Together Now” takes center stage 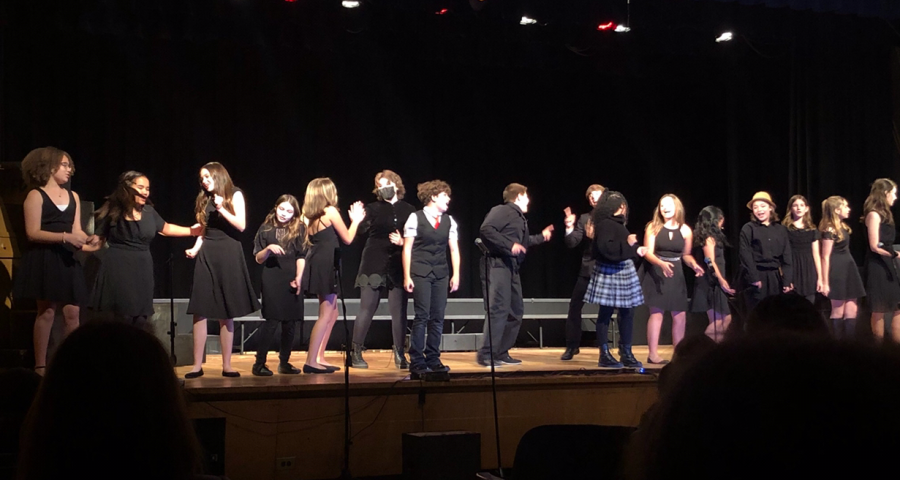 Students from Emerson Jr.-Sr. High School performs in a musical revue meant to boost interest in live performances once again.

The Emerson Jr.-Sr. High School’s theater was packed when the lights, once bright, dimmed and the show began. Students, even some parents, sang songs from the musical revue “All Together Now”.

“It was very good. I liked how they had just songs, and it wasn’t based on a story,” Maura Mathews said. Matthews, a fifth-grade student at Patrick M. Villano School, was one of dozens of elementary school students who attended the show produced by Musical Theatre International (MTI).

“I thought that [“Supercalifragilisticexpialidocious”] was super cool [because] the way everyone was dancing on the stage,” student Sophia Rizzo said.

All songs in the musical revue were performed for free without any license or royalty fees. The idea is to bring theater back to business after coronavirus health concerns shut down performances around the globe. MTI’s website states, “MTI’s All Together Now! was designed as a fundraiser for local theatres to perform live, over the same four-days November 12 – 15, 2021. The past year-and-a-half has been extremely challenging for theatrical organizations and MTI offered this exclusive musical revue as a way to support the thousands of theatres who are persevering under trying circumstances.”

Actors of all heights, sizes, and ages cam together in this epic and entertaining production. The opening act “Pure Imagination”, which included half the cast members, was filled with singing and creative choreography and was highly praised by the rest of the audience with loud applause. Multiple upbeat songs like “Pure Imagination” were also well received. “Tomorrow” from Annie and “She Used to be Mine” from Waitress were beautiful. The finale “You Can’t Stop the Beat” was a very fun and positive way to wrap up the show. Most of the cast took part in this scene and afterward bowed to the audience as clapping erupted in the auditorium.

“MIT will not collect any money. This event is designed as a fundraiser for individual organizations to administer, “states MTI’s website.